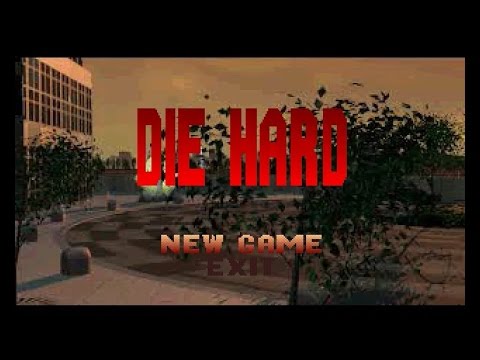 Quite an early game on the original playstation and it contains 3 completely different play styles. Once your lives are used up its game over, but you can pause and use the save game function to enable the ability to continue. I show the 3 Game over (fail) cinematic’s at the end of the video.

00:00:00 Die Hard:
I never liked and still don’t like this first part of the game. It is way to long and just keeps rotating the same 4 or 5 maps. The controls are a little cumbersome which makes it look like Mclane is drunk the whole way through. I don’t worry to much about the different weapons and the start, but later on the machine guns help greatly. The Explosive shotgun can be very annoying as it is way to easy to hit the hostages, and I could find no drop weapon function.

02:04:40 Die Harder
This is the best part of the game and the whole reason it was bought and makes use of lightgun (Pad play is shown here). It’s on rails with some great music. The game gets realy difficult near the church and snowski sections as it becomes far to easy to shoot the hostages and lots of stuff shooting at you at once.

02:54:20 Die Hard with a Vengeance
Another section I never liked very much, but only because it has some really evil time limits which take you right down to the last millisecond as there is not much if any room for error, especially on later levels making the game very frustrating at times. In some levels, you can swap cars for different characteristics and mission suitability, but due to the above time issues, you can really waste time to do the car swap so I don’t show this aspect often.

One thing that stands out about this driving section is how smooth it can be and how colourful it is. Sure the cars have a low poly count but its 1996. This game makes driver which came out in 1999 look old. Also, another aspect which is probably not in many driving games, and never likely to be is the blood splatter in cockpit view. It makes quite a mess when running over a pedestrian and the wipers come on to clean it a way. This is what GTA should have been when it came to playstation Wink